It's really hot and humid day here in Northeast Iowa...it's been that way for several days in a row.  It reminds  me of the days my kiddos would beg to have a water fight. I know, I know, maybe I was a bit of a prude but I will readily admit that guns, regardless of the type are just not my style.  It's something that goes way back to my childhood when my brother pointed a real gun at me that supposedly wasn't loaded.  I yelled to tell my mom that my brother was pointing a gun at me.  My brother pointed the gun at the ceiling and said, "Quit being a baby.  See it isn't load."  He pointed the gun at the ceiling, and pulled the trigger.  The bullet discharged from the gun and shot a hole through the ceiling of the kitchen.

After that whole experience I just do not like guns in any shape or form including squirt guns.

So how did my kids have a water fight? With water bottles...it makes sense to me. 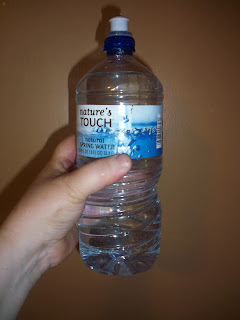 Just save your old water bottles with the pull top lids, refill them and let them squirt each other.  As the kids squeeze the bottle, the water sprays out.  Ketchup bottles work great too.

The other great news is that they are free and you can have lots of them stationed around your play area.

As parents and care providers, it's great that we set up rules and policies like "No Guns", but it's also important that we provide other options so that kids can feel normal too.

When I was growing up, one of my favorite treats that mom "made" were these...Vanilla Wafer Cookies. 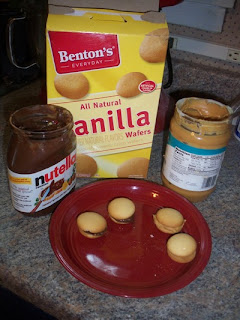 I made them for my kids and my daycare kids....but often, them made them for themselves.  What can be quicker and easier than opening a box of vanilla wafers and spreading a dollop of peanut butter or Nutella between them?

It's SO easy kids can make them for themselves.  If you are a parent or childcare provider, these are the perfect to help kids build self help skills. They also provide a way for kids to learn one to one correspondence.  One vanilla wafer top...goes on one vanilla wafer bottom.

Please keep in mind this snack has both peanut butter and gluten...just in case those are things your kiddos can't have.

"F is for Friendship: A Quilt Alphabet"

I am an avid quilter and I love children's books.

I found a great book from Sleeping Bear Press that combines both..quilting and children's books.

Follow this link over to my other blog to read the review and have a chance to win your own copy.  The book is a beauty!!
Posted by Jo at 5:27 AM No comments:

Toys: Too Much of a Good Thing

There's a trap for us parents out there.  It's called marketing.  Everyone tells us that our kids need this...our kids want that.  But do they need and want all of it?

As a parent, I fell into the trap.  My kids often got something most of the times we went to town.  I always justified it with a..well it was just 25 cents at the garage sale...and let's be honest, I used toy purchases as a bribery method at times.

The mound of toys became overwhelming.

I am a avid quilter.  I have fabric and patterns.  I have a room and cupboards for all my goodies.  I can keep it all fairly organized but it can all overwhelm me sometimes.

I have a junk drawer that has no organization it overwhelms me ALL the time.  I can NEVER find anything in it...the same goes for my utensil drawer in the kitchen.

Who ever said too much of a good thing is not a good thing was completely right.  Truthfully speaking, I will never make all the crafts and projects that I have patterns for.  I will probably never used some of the utensils in that drawer and goodness knows I'll never find the AAA battery in the junk drawer and if I do...it won't have any power left.

Sometimes the excess just weighs me down.  There are so many projects there to make that often I don't make any because I can't choose which one to make.  Sometimes I just start a different project because I don't want to go in and find all the needed items.

I am guessing that kids feel the same way.  Is it all too much for them?  Are they overwhelmed with too many choices?  Do they sometimes just forego playing because it's a pain to find all the pieces needed for the game?

I know lots of family disagreements that happened at our home happened in relationship to toys.  They weren't picked up...they weren't in the right place...they weren't taking care of them...I can see now that I should have just bought fewer toys regardless of if they were only 25 cents.

More importantly than all of that...The excess of toys limits their imagination.

My farmer husband who grew up the only boy with 5 sisters often tells stories about his toys as a kid.  He tells how he spent hours with a tricycle that had a broken pedal.  He would turn the tricycle around and push it through the mowed grass pretending it was a combine and that he was harvesting crops.  He says it was his favorite toy.

For me..the favorite thing that I grew up with was by far the pet dogs we had.  I played with them far more than I ever played with toys.

Think about it...Do you have an excess of toys?  Are toys overwhelming or entertaining your children?
Posted by Jo at 12:50 PM 1 comment:

I love baking with kids but sometimes, it's a lot of work and quite messy.  This recipe is easy and not very messy at all! 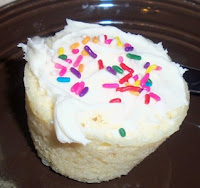 For ingredients you need one box of regular cake mix any flavor.  One box of angel food cake mix.  Water. 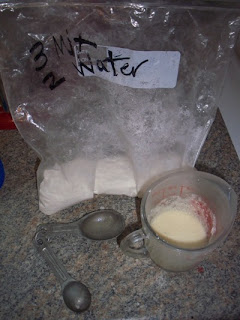 Mix one box of dry cake mix...(We used vanilla but you can use any flavor) with one box of angel food cake mix.  Just mixing the dry cake mixes together.  Put it all in a bag...it is your new go to microwave cake mix.


Now to make a an actual cupcake...in a small microwaveable cup:  Mix 3 Tablespoons of the cake mix with 2 Tablespoons of water.  Stir it up good and microwave for 1:45 minutes.  (My microwave is low wattage.  If your's is high wattage try a smaller amount of time the first time you make it)   Keep the remaining mix in a airtight bag or container for the next baking day.
In two minutes (or maybe a bit less) you will have a cupcake.  Let it cool.  Invert from container.  Frost and of course add sprinkles. 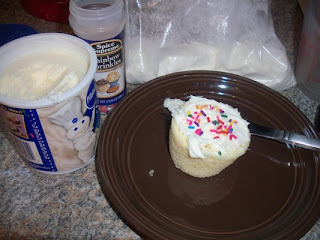 How easy way that!!  Baking is a great way to add a little counting skills but more importantly self help skills into your child's day.

These would be great to make for Dad for Father's Day!  To see a strawberry shortcake version head over to my other blog.  Baking with kids is What Works for Me.  I am sharing this recipe at The Mommy Club.

My admiration goes out to all the teachers who give it their all to inspire the children in their care to achieve at the highest possible level. My work here on the blog and on my website, Making Learning Fun, is dedicated to you! To learn more about me and how I got here, check out the "About Jo" page.

Feel free to contact me anytime at:
jokramer@
makinglearningfun
.com